"Artists can play important roles as game changers, telling stories that challenge society. I am often disappointed though that too frequently, they just reinforce the status quo, particularly when we are talking about what is and isn’t beautiful, sexy or acceptable as a body. Even when they tell stories about people who are ‘others’ – disabled, have an impairment, or even just a big nose – the truth of the story is undercut because so much praise is heaped on the non-disabled actor, who we all know to be a super-hottie, for playing someone considered undesirable.” – Kiruna Stamell

In this talk, performer Kiruna Stamell discusses the importance of ‘truth’ when producing work about disability and the disabled experience. 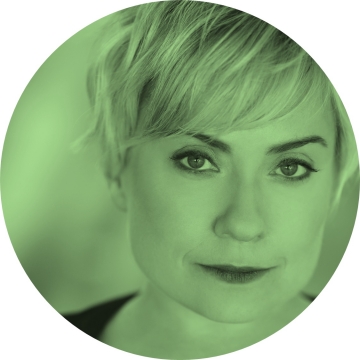 Kiruna is an Australian actress, who lives and works in the UK. Kiruna’s career is international, but she likes to get back to Australia for work as often as possible.

Most recently Kiruna presented at the Remix Summit for Creative Arts Victoria 2018. Filmed a movie (we can’t talk about yet) and became a presenter on Play School for the ABC.

Earlier this year, Kiruna had a season in the North of England at Bolton Octagon Theatre, playing several characters in Jane Eyre and Guildenstern in ‘Hamlet’.

In 2017 Kiruna appeared in the Belvoir Street's production of 'The Rover' and was also featured on the ABC's Australian Story celebrating her successful career.

Prior to this, Kiruna starred as Anna, in the Olivier-Award-nominated production ‘The Government Inspector’, that toured London and throughout regional UK. She also acted, danced and sang in Hackney Empire’s Sleeping Beauty as the Green Fairy, ‘Willowsnap’.

2015 saw Kiruna’s 3rd play at the National Theatre, Directed by Rufus Norris, Written by Carol Ann Duffy, Movement by Javier De Frutos and Chiwetel Ejiofor in the title role. It followed on from her performance in Tim Crouch's, ', An Oak Tree' and Richard Bean's 'Great Britain', which marked her debut for the National and also the West End.