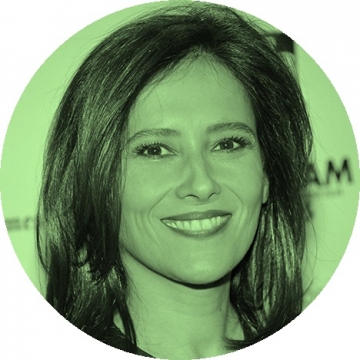 Joana Vicente has been the Executive Director of the IFP- the oldest and largest nonprofit organization for independent filmmakers in the U.S.- since December 2009. Under Vicente’s leadership, the IFP was most recently bestowed with the honor of developing and operating the Made in NY Media Center after an RFP was issued by the Mayor’s Office of Media and Entertainment and the New York City Economic Development Corporation. The state-of-the-art Media Center brings together professionals from the film, television, advertising, new media, gaming, marketing and branding industries for collaboration and new opportunities, and opened in DUMBO, Brooklyn in October 2013.

Prior to the IFP, Vicente and her partner Jason Kliot produced/executive produced over forty films by such acclaimed directors as Jim Jarmusch, Miguel Arteta, Brian De Palma, Hal Hartley, Steven Soderbergh, Nicole Holofcener, and Todd Solondz. She has co-founded three separate and unique film production entities over the course of her career. These include Open City Films, Blow Up Pictures, the first digital production company in the United States, and HDNet Films, an award-winning digital production company founded with Mark Cuban and Todd Wagner. Among the many films that Vicente and Kliot have produced are Tony Bui’s Sundance Grand Jury Prize and Audience Award-winner THREE SEASONS, Jim Jarmusch’s cult classic COFFEE AND CIGARETTES, Niels Mueller’s THE ASSASSINATION OF RICHARD NIXON, Todd Solondz’s Sundance Grand Jury Prize-winning WELCOME TO THE DOLLHOUSE, Brian De Palma’s controversial REDACTED and Alex Gibney’s Academy Award® nominated ENRON: THE SMARTEST GUYS IN THE ROOM. Vicente has served on the jury at Sundance and many other festivals.

Vicente’s films have garnered numerous accolades and awards, including twenty-three Independent Spirit Award nominations and four wins. In 2007, she was the recipient of the Made in NY Award for individuals who have made outstanding contributions to New York City’s entertainment industry. Vicente graduated from the Masters program at The Catholic University of Portugal with a degree in Philosophy and began her career as the press attaché for the Portuguese delegate-and former Prime Minister of Portugal-at the European Parliament. She later became a radio news producer for the United Nations before turning her attention to film.