In his keynote talk, Wayne will be exploring: what festivals can achieve in the context of current socio-economic challenges? What could the future of regional towns like Blackburn, Morecambe, Redcar or Darlington look like? What creative infrastructure is necessary to achieve this? 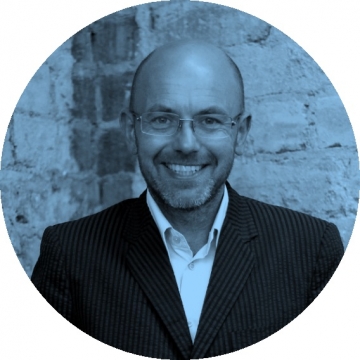 After spending most of his childhood in Blackburn, a young and multicultural Hemingway left school with ten O-Levels and four A-Levels. In 1979 he made another inappropriate decision for a future designer and gained a degree in Geography and Town Planning at University College, London. Whoops.

But it was his most inappropriate move of all that sealed his fate forever. One bright day in 1981, Wayne nicked his and childhood sweetheart (now wife) Gerardine’s rent money to buy practice space for the band he then played in*. To recoup the cash, he emptied their wardrobes, which were full of handmade and vintage clobber, and flogged the contents on Camden Market. It went outrageously well, and the realisation that money could be made from fashion suddenly dawned.

Alongside Gerardine, Wayne built Red or Dead into a globally-celebrated label and, after 21 consecutive seasons on the catwalk, sold it in a multi-million-pound deal. In 1999, fresh from the sale of Red or Dead, Wayne and Gerardine embarked on a new adventure: HemingwayDesign. And the rest, they say, is history.

Other than his BSc degrees in Geography and Town Planning (which, surprisingly, have become very useful!), Wayne spent 6 years as a Design Council Trustee Board and having been with CABE for a decade since its inception (as Chair of Building For Life ), has been a Mayors London Leader and currently supports the Mayor of London , Sadiq Khan as a Design Advocate He got an MBE in the Queen’s Birthday Honours list of 2006, is a Professor in The Built Environment Department of Northumbria University, a Doctor of Design at Wolverhampton, Lancaster and Stafford, and an Honorary Fellow of Blackburn College, the University of Cumbria and Regents University. (Just call him Prof, Doc, Doc, Doc Wayne Hemingway MBE, BSc, MA, Esquire.)