Working Environments at the Intersection of Productivity and Happiness 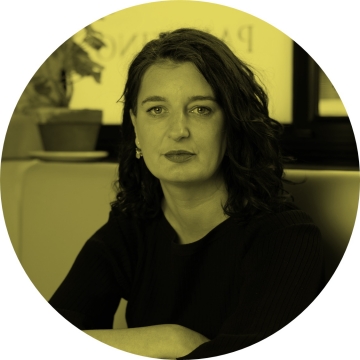 Katrina Larkin co-founder of Fora, leaders of the workspace revolution. Their first space opened in Clerkenwell January 2017 and now has nine locations across London and Reading with a further three due to open by the year end. Forget what you know about co-working; Fora is reimagining the entire experience. They call it pro-working.

A pioneer in the festival world, Katrina Larkin co-founded The Big Chill Festival in 1994. Beginning life as a small gathering, the event eventually grew to become an internationally recognised brand, launching and operating three award winning bars, a record label and attracting some 40,000 visitors annually. In the process, The Big Chill spawned an entire industry of similar events and boutique festivals in the UK.

Katrina established leading lifestyle trends within The Big Chill including contemporary street food and The Art Trail (getting established artists like Vivienne Westwood, Tracey Emin and Damien Hirst to create out-door installations). In addition, she produced concepts with leading cultural figures and organisations, including Punchdrunk, UK photographer Rankin and Spencer Tunic’s naked installation involving photographing 1000 volunteers in public, securing a Sunday Times and Evening Standard cover in the process. Katrina also created sponsorship deals and concepts with major fashion, tech and drink companies as well as annual media partnerships with The Guardian, The Independent, The Times, BBC6 Music and Radio 1.

During her time at The Big Chill, Katrina developed a community of ‘Chillers’ that engaged with each other via a forum. The Big Chill was also the first event in the UK to stream live events and to create an online radio station. She also managed several tours of The Big Chill Internationally.

Katrina ultimately sold The Big Chill festival to Cantaloupe Group in 2008 remaining as Creative Director until 2010. In that same year, she was awarded the 'Lifetime Achievement Award' at The UK Festival Awards and organised the London ‘The Haiti Benefit Gala, supporting ActionAid and Médecins Sans Frontières humanitarian aid efforts after the 2010 earthquake.

In March 2013 Katrina began working with Brockton Capital Fund II L.P. on the long-term curation, brand re-positioning and redevelopment of Camden Lock Market. Here she developed an event programme, changed press attitudes to the market and curated retail offers of quality. She also successfully led on all tenant negotiations and communications on the proposed planning application.

In 2014 Katrina joined Market Tech, the buyer of Camden Lock Market, as Commercial Operations Director. In addition to overseeing 16 acres of Central London real estate for the company and being instrumental in the granting of planning permission for the Lock Market, she was also influential in the planning and launching of Market Tech’s co-working office space ‘The Interchange’.