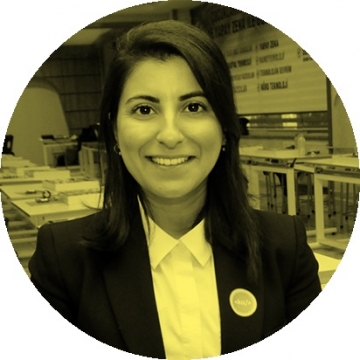 Under the mentorship of academician, Ünsal Oskay, Müjde Esin studied Communication Design at Beykent University in Turkey, graduating with BA Honours. She completed her master's degree in Media Management at the University of Westminster. She worked as a project manager at Syrian Refugee Camp in Gaziantep, Turkey; as a Co-Director at Skyturk360; and as a Program Producer and Co-Director at TRT.

Esin founded KizCode as a social enterprise in 2016. She collaborates with companies in Turkey and the UK to deliver computer-coding workshops to girls and young women. The workshops aim to give girls and women the skills to gain financial independence in migrant patriarchal communities. KizCode received an innovative corporate social responsibility award from the United Nation and Junior Chamber International (JCI) in 2016. Esin was also selected as the most successful Women Educator of the Year at Microsoft Turkey's Women Leaders of Technology award ceremony in 2017.