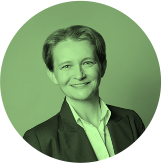 Anita Mitchell has over 25 years’ experience in executive management, sustainability, social impact and corporate assurance spanning energy, water, waste, property and construction in both the public and private sectors.

In January 2021, Anita joined the NSW Department of Planning, Industry and Environment as the inaugural Chief Executive of Placemaking NSW. She now leads the teams responsible for managing and developing some of Sydney’s most treasured places, including The Rocks, Darling Harbour and Sydney Olympic Park, as well as key locations in the Hunter and Central Coast regions of New South Wales.

Prior to this Anita worked at Lendlease for a decade in a range of roles. Initially, Anita led the environmental and social sustainability strategy for Australia’s first certified carbon neutral precinct – Lendlease’s $6 billion Barangaroo South development in Sydney. Here she delivered world’s best practice sustainable design and health and wellness initiatives.

In 2016, she was appointed Lendlease’s Head of Sustainability - Europe. From London, she steered the development of sustainability strategies for over A$50 billion of development, investment and construction activity in the United Kingdom and Italy.

Before Lendlease Anita managed sustainability and environmental programs for one of Australia’s largest energy distributors, as well as the country’s largest water authority and waste management operator.

She holds a Bachelor of Environmental Science, a Master of Environmental Management and an MBA – completed under full scholarship as “Australia’s top emerging leader and MBA scholar” selected by The University of Sydney and AFR BOSS magazine in 2012.