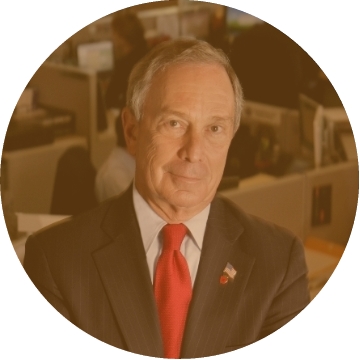 Michael R. Bloomberg is an entrepreneur and philanthropist who served three terms as Mayor of New York City, from 2002 through 2013. He began his career in 1966 with an entry-level job at Salomon Brothers, an investment firm. After being let go in 1981 he launched a technology startup providing real-time financial data service, Bloomberg LP, which grew into a global company that now has offices in 73 countries around the world and employees 15,500 people. As a philanthropist, Bloomberg has given away more than $3.3 billion in support of education, public health, government innovation, the arts, and the environment. His foundation, Bloomberg Philanthropies, works to ensure better, longer lives for the greatest number of people. Bloomberg also leads a number of bi-partisan coalitions that are taking action on urgent national issues, including illegal guns, immigration reform, infrastructure investment, and climate change. He serves as board president of the C40 Climate Leadership Group, a network of the world's megacities working together to reduce global greenhouse gas emissions. In 2014, U.N. Secretary-General Ban Ki-moon appointed Bloomberg to be U.N. Special Envoy for Cities and Climate Change, where he is focusing on helping cities and countries set and achieve more ambitious goals for mitigating and adapting to climate change. As Mayor of New York, Bloomberg cut crime to historic lows, revitalized the waterfront, implemented ambitious public health strategies, expanded support for arts and culture, introduced new anti-poverty programs, reduced the city’s carbon footprint by 19 percent and drove high school graduation rates up by more than 40 percent. The Mayor’s economic policies helped New York City create a record number of jobs, rebound from the 9/11 terrorist attacks, and weather the Great Recession in far better condition than most other cities.